Alston, NCD, Dec 31 – As a momentus year finally draws to a close, Premier Daniel Anderson has expressed his desire for a happier and more peaceful 2011.

“We have seen so much in the last two months, let alone the entire year. What was meant to be the ‘Year of Peace’ degraded into a series of wars, fighting and generally uncivilised behaviour. Austenasia, Kyng Fyrst, Sebastiano von Linden, all to name but a few. And yet there have been the high points, the times where we all pulled together and worked as a united front. To everyone out in the MicroWiki community, I ask that we put aside our differences and be friends once more. We are just hours out from 2011, let’s change things for the better.”

Tonight’s celebrations across Sirocco will end the nation’s foundation year and usher in a blank canvas which may very well dictate Sirocco’s position in the community for the foreseeable future. In Alston and Minnerichell there are plans to see in the new year with movies and fireworks, while elsewhere the celebrations will be much quieter, with simple celebrations within the cities, or in some cases simply sleeping through it. 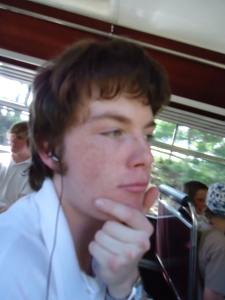 2010 has been a busy year for Premier Anderson, who says he looks forward to advancing Sirocco in 2011.

Here are some of the events that sculpted a tumultuous 2010:

The Von Linden saga
Possibly the most notorious bad-boy of the micronational community in 2010, Sebastiano von Linden is widely viewed as responsible for Philip Fish’s resignation from the OAM as well as trying to tear the community apart. However his numerous bans have garnered much controversy in the community, and only time will tell what his ultimate fate is.

Austenasia at War
One of the year’s most well-known wars was the one that broke out on March 7 after Princess Caroline of Austenasia made an official claim to the Austenasian throne after Esmond III was crowned Emperor. The resulting conflict saw physical battles and a number of micronations declaring war on each other, but was ultimately resolved with Esmond III winning a referendum on the fate of the Austenasian monarchy.

However the peace was not to last, as this month war again broke out in the Carshalton sector, between Austenasia/Rushymia and Orly/Midget Nation-in-Exile. Austenasia was expected to win this war, but to the surprise of many it was defeated, and Declan was made co-emperor of the Empire.

Mass Exodus
When Wikia changed the layout of its pages and forced all admins to comply, there was a great uproar from not just the micronational community but also the Wikia community. This action began what is known in Sirocco as the “Mass Exodus”, which involved MicroWiki’s hosting moving to ShoutWiki, then Referata, and finally at the .co.cc domain. However shortly after the dust had settled from the final move it was discovered that Slinky leader Kyng Fyrst had assumed control of the original MicroWiki and that the old administrators had been stripped of their privileges. Sirocco formally halted diplomatic relations with the Slinky Empyre on November 19. Relations have not been restarted and it looks unlikely they ever will be.

However 2010 did have its good points, especially for Sirocco.

After 65 days of preparation, Sirocco was finally founded on November 4, 2010.

Foundation
When Sirocco was founded on November 4, it was just a small micronation with no influence whatsoever and with only few friends. In under two months it has been transformed, with almost a dozen friends, two diplomatic treaties and an alliance with Zealandia. Premier Daniel Anderson has been praised by both Alexander Reinhardt of St.Charlie and Peter Bralesford of Egtavia, with Reinhardt stating that “we know that the Federated Commonwealth is a young-but-full-of-potential micronation, thanks to him,” and Bralesford also stating that “[Anderson] stands by his views but isn’t rude about it.”

The end of the GDR
The Glorious Dictatorial Republic of Andersonia was officially dissolved at 10:10am on November 3, ending just shy of a year of the nation’s almost entirely internet existence. While the nation never really thrived, it reached its zenith in mid-late 2009, before slumping into inactivity in mid-2010. The GDR’s lasted recorded activity was the sorting out of small matters on November 2, in preparation for its dissolution the next day and Sirocco’s foundation on November 4.

What do you think?
What, in your opinion, were the highlights and lowlights of 2010 in the micronational community? Leave a comment below on your thoughts on the past year.