Ianson Island, NCD, Jan 23 – Heavy rain falling across New Zealand’s North Island has seen surface flooding in many areas, including the National Capital District which has been inundated by floodwaters. 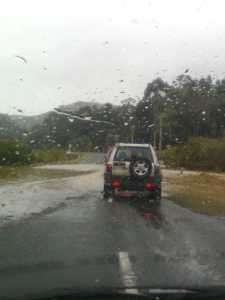 OVERFLOW: This highway east of Alston was flooded by 11am this morning.

Lastest conditions by Sirmet show heavy rainfall over the last few days has seen 200mm dumped on the region in the last few days. This deluge was too much for some waterways which have risen by as much as three feet in a matter of hours. King tides in the late morning also contributed so some flooding, a usually placid river east of Alston burst its banks for the first time in memory (see picture), flooding a major arterial road for some time. Traffic was able to pass through the floodwaters, but any hope of walking the highway was washed away.

The Siroccan government has been monitoring conditions in the Garden River and also on Ianson Island, which has been overwhelmed by water. Conditions at 8 o’clock tonight were deemed as “suitable” with no threat of flooding to Alston from the Garden River.

“The Garden River is holding out remarkably well.” stated Premier Anderson in talks this evening. The major clearing and tidying up of the river has increased its water capacity and this means there is little threat of any flooding in Alston. There has been flooding on Ianson Island, and the speed of the river currently makes access there impossible. But this is not the first time we’ve seen flooding and it certainly won’t be the last.”

New Zealand’s biggest city, Auckland, has been hit hard by the deluge, with king tides seeing water pouring over roads and turning quiet suburbs into lakeside developments. A king tide late tonight is expected to cause even more trouble than the ones seen earlier today.

Today’s flooding (or lack of) comes nowhere near the levels reached in the floods of three years ago. On March 29, 2007, a “weather bomb” saw the biggest floods in the Northland region since 1981, with major flooding hitting the Bay of Islands hard. Ianson Island was reportedly so badly affected that the water level rose to about 30-35% up the trees on the island, and the Garden River had also risen to become nearly level with the Alston Motorway, completely flooding the Tent Pegs National Forest. The floods are famous in Sirocco for preventing the Premier from getting home that night, instead having to stay in a house outside Kerikeri township.

Rains are expected to begin clearing from tomorrow, just in time for the major governmental conference scheduled for the middle of this week.