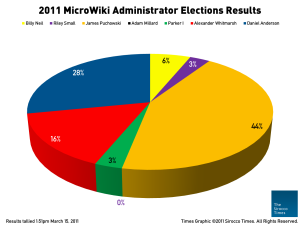 Alston, NCD, Mar 14 – With 14 votes and 44% of the vote, James Puchowski has defeated Premier Daniel Anderson to become the next MicroWiki administrator.

Since voting began on Friday morning, Puchowski had seen his share of the vote slowly increase against nearest rival Daniel Anderson, who lost the election with just nine votes with a 30% share of the vote. The voting pattern is understood to have shocked the Premier, who had been the favourite of current administrators Aldrich Lucas and Philip Fish and many other significant micronationalists.

Puchowski had been criticised for his lack of use of his abilities when he was a forum administrator in January of this year, while concern had been expressed over Anderson’s use of the WYSIWYG editor.

Anderson conceded the election at 12:35pm this afternoon, citing that he would not be able to win a decisive victory over Puchowski. A results check at 1pm confirmed that Anderson had lost by 16%. This result had been expected for some time despite a promising start on Friday.

It is understood that Puchowski is deeply unpopular with several members of the community, some of whom are prominent figures. Throughout the campaign, Anderson has questioned Puchowski’s ability to provide consistent leadership.

Indeed, some believe another election may follow soon given Puchowski’s poor track record when given positions of authority. Anderson has confirmed it is unlikely that he will run for administrator again if nominated.