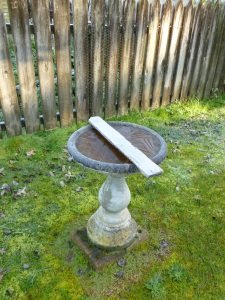 COLD: Ice on the National Monument to Birds shows just how cold Alston got overnight

Alston residents woke up this morning to blankets of frost across the Alston Domain, Line Park and Mosgiel Green and mist rising from the Garden River. Most attention, however, was given to the National Monument to Birds in the Domain, which had frozen over for the first time ever.

Premier Anderson stated that “I know it’s cold, all we can do is hunker down and be warm and wait for the cold front to pass.”

But it wasn’t just Alston freezing, as reports came in from Ridgelow, Kent and Riverhill Park of frosts and freezing. Alston had some comfort to know that the Still Waters City Pool in Ridgelow also froze overnight.

It is thought it is the first time the Bay of Islands area has dropped below zero degrees at any time, and certainly there have been no reports of frozen ice on anything but grass and car windscreens since records began 1987.

Elsewhere in Sirocco, icy wind made for a chilly day in Otanaki, and on Monday snow fell on Watchman Island in the Waitemata Harbour in Auckland for the first time since 1939.

However Alston has got off lightly compared to Denton, Zealandia, which has had to endure major snowfalls and subzero temperatures following an Antarctic blast which has brought record low temperatures to most places across New Zealand and snow as far north as Kaikohe, around 32km west of Alston. Power supplies to Denton have in the last couple of days become unreliable and shovelling snow has become the new craze in the city.