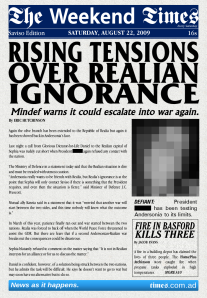 HOSTILITIES: Just months into its life, Andersonia was already at war.

As Sirocco marks five years since the creation of the Glorious Dictatorial Republic of Andersonia, the Times is opening up its archives to present articles not seen since they were first published in the Andersonian Times all those years ago. Join us as we take a trip down memory lane to simpler, if stranger, times. Some details will be slightly altered so as to protect the identities of some persons involved – these details are underlined.

Today’s article from 22 August 2009 returns to the icy relationship between Andersonia and Realia. Despite several months of peace, again tensions broke out toward the end of August. Despite being friends with many, it could never quite win over Realia, and the two would continue to lock horns, culimating in both nations’ participation in the Andersonia-A3 war in September 2010, which resulted in an Andersonian victory.