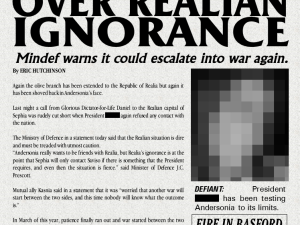 Alston, NCD, Feb 17 – The Siroccan government has put its support behind the legitimate Zealandia following its fracturing into two nations yesterday. Following a governmental dispute, President Hakon Lindstrom stripped Prime Minister Alex Whitmarsh of his role and called elections himself. »

Communism has fallen in one of the community's reddest nations. Funnily enough, this is a good thing. »

Fush is Natzi scum, or at least Will would like to think so… Story of the Century: A1 is to be disestablished (apparently). Story of the Lulz: Sandus thinks A1 is a modern Nazi Germany. You think I’m joking? In this fantastic bit of tripe from his local rag, Will Sörgel of the Ever So »

Alston, NCD, Jan 15 – The Premier has slammed the new ideology of Theodorism and defended Sirocco’s “unashamedly capitalist roots”. This evening it was announced that Crown Prince Jonathan of Austenasia had created a new political ideology essentially merging, peculiarly, »

Alston, NCD, Sep 8 – Sirocco has become involved in what is possibly the largest debate in the history of the MicroWiki community following the leak of a dossier by former Erusian leader Robert Lethler. While the Siroccan Government has refused to release all details, it is known that the »

Alston, NCD, May 20 – Premier Anderson has released a statement on his opinion towards the current crisis in the Kingdom of Zealandia, in particular towards Sandum espionage, von Linden’s involvement and the problems the crisis is causing in the wider community, including Sirocco. The »

Alston, NCD, Apr 1 – Tensions between A1 and St.Charlie have boiled over this morning with an official declaration of war between the two nations. The Ministry of Defence is releasing few details at this early stage, but it has confirmed that differing opinions on subjects such as the »

Alston, NCD, Mar 29 – Despite the seemingly unbreakable relationship between St.Charlie and A1, problems are beginning to surface after a breakdown in talks held between the two parties. It is believed that the current state of affairs stems from recent activity on MicroWiki, in particular »