SHORTFALL: MicroWiki is running a deficit of over §2 3d per month, causing concern amongst site management. 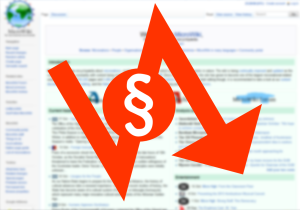 SHORTFALL: MicroWiki is running a deficit of nearly §2 4d per month, causing concern amongst site management.

Rathlyn, HB, Oct 20 – MicroWiki site management has expressed concern about a financial gap that is seeing the site run at a more than §2 monthly deficit.

Site owner Pierre d’Egtavie revealed in the Micropolitan IV chatroom this afternoon that average daily views of the site have dropped from a peak of 10,000 per day in March 2012 to an average of 1,400 per day as of midnight London time today.

The news comes as activity on rival site MicroWikia continues to grow, with most days’ activity outstripping that of MicroWiki.

D’Egtavie, as well as several other wiki users, have pointed the finger at apparent aggressiveness on the part of some site users towards new community members, often prompting them to leave the site and join MicroWikia.

D’Egtavie has also proposed sweeping changes to MicroWiki in a bid to increase activity and appeal on the site, as well as changing away from current site host HostGator.

Community member Sebastian Linden has proposed using a domain he owns as the host for the site, yet has admitted some size issues may cause problems.

D’Egtavie has confirmed work will begin on the site refresh this evening Rathlyn time.